GALAPAGOS PHOTOS START BELOW ON THIS HOME PAGE

GALAPAGOS ISLANDS, ECUADOR - APRIL 2007
Page One of Nine - Link to Page Two at the bottom of this page 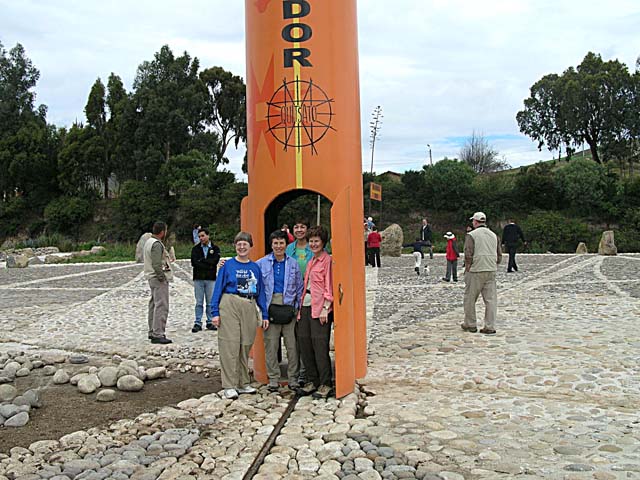 Shirley, Pat, Margaret, and Heather at the Equator - 0 degrees latitude and 0 degrees longitude
We spent two nights in Quito, Ecuador before flying to the Galapagos Islands 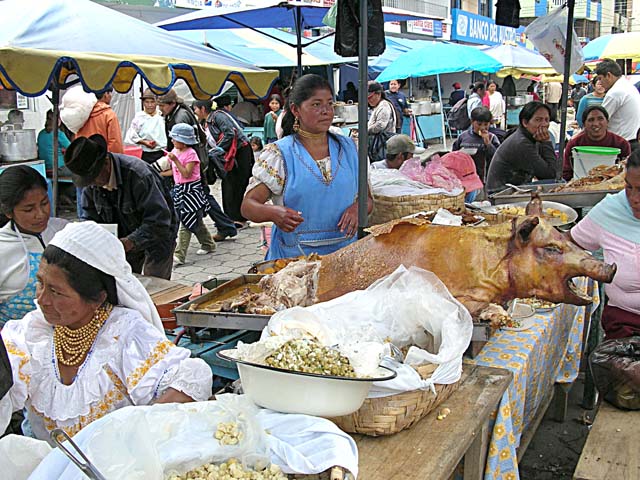 Otavalo Market near Quito - dates back to pre-Inca times, when jungle products were brought from eastern
lowlands and traded for highland goods. It's now both a local market for buying and bartering animals,
food, other essentials and a craft market for visitors. Yes, that's a pig. 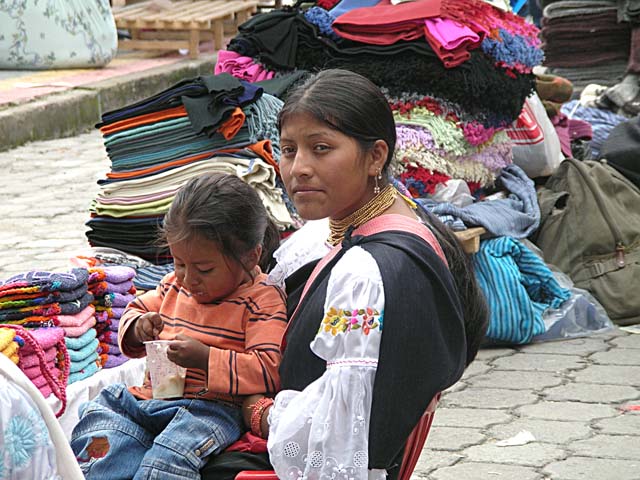 Vendors typically have their children with them 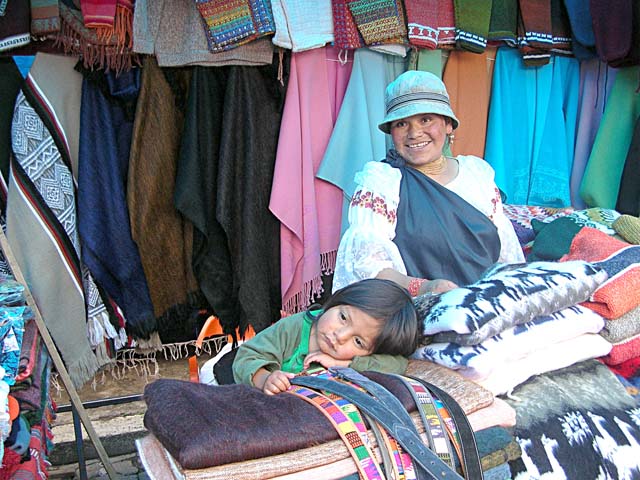 Woman from whom Shirley bought a beautiful jacket 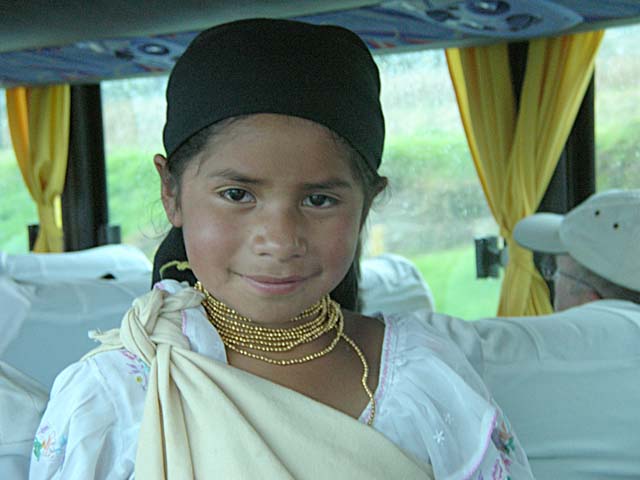 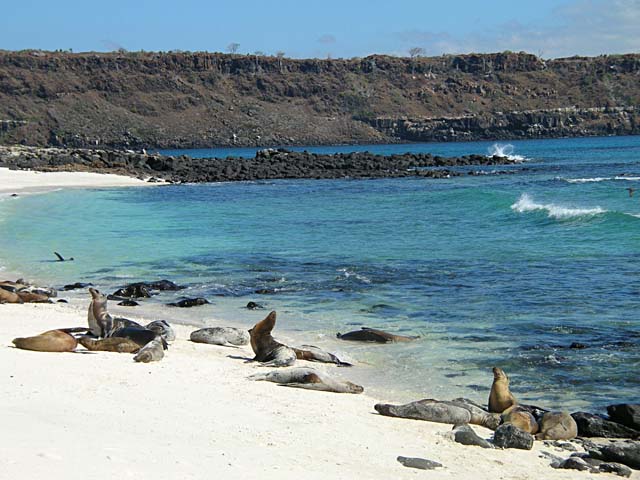 Sea lions on the small island of Mosquera in the Galapagos Islands - Galapagos National Park
Consisting of 13 major islands, 17 smaller islands and more than 40 rocks, the Galapagos National Park
preserves an unique environment. The Galapagos comprises 3100 square miles, which includes 90%
of the land surface and the entire ocean area within the region. The islands arose directly from
the sea as tips of huge submarine volcanoes. Throughout this vast natural haven
there are just 54 sites where visitors are allowed. These sites are pre-determined by the the National Park
Service in order to minimize the effect of tourism in the islands. You must be accompanied by a certified
naturalist guide while in the park and stay on established trails. Snorkelling is also only allowed in
designated areas. You cannot urinate in the Park or bring food into the Park. 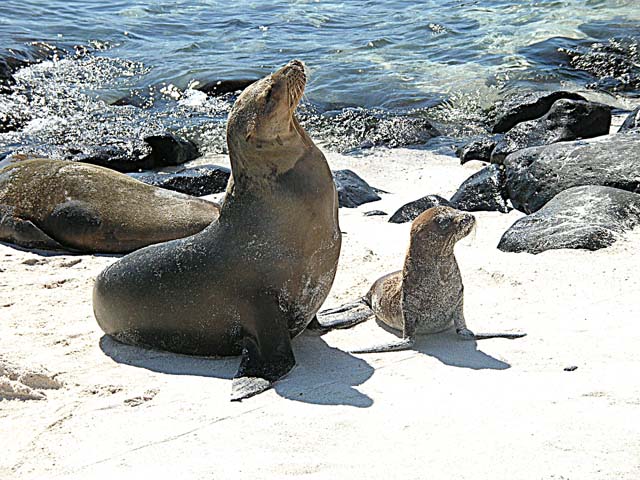 Mother and pup sea lions - The most common native mammal, Galapagos sea lions, a
subspecies of the California sea lion. They live up to 20 years. Dominant males patrol beaches and have mating
access to females as long as they can defend their territories, very demanding work. The mother sea lion bonds
with her pup by vocalization and smell. That's one reason why you must not touch the pups as the mother will
abandon a pup that has a human smell. 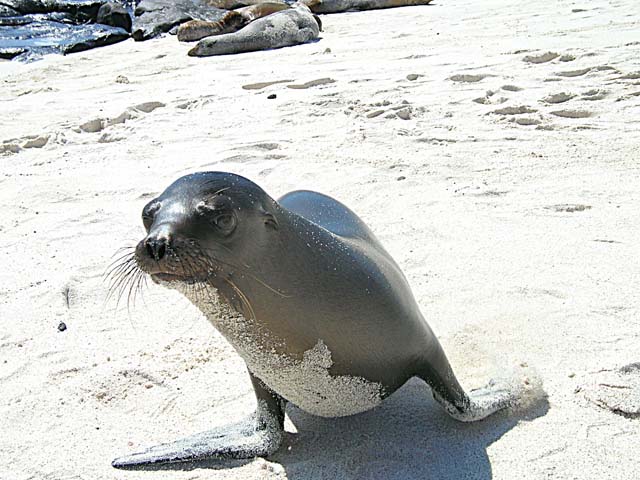 Females and pups are curious and have no fear of humans. This pup kept coming toward me and
eventually came too close to even take a picture. When we were snorkelling, we often saw sea lions in the
water with us. Once one swam alongside me. 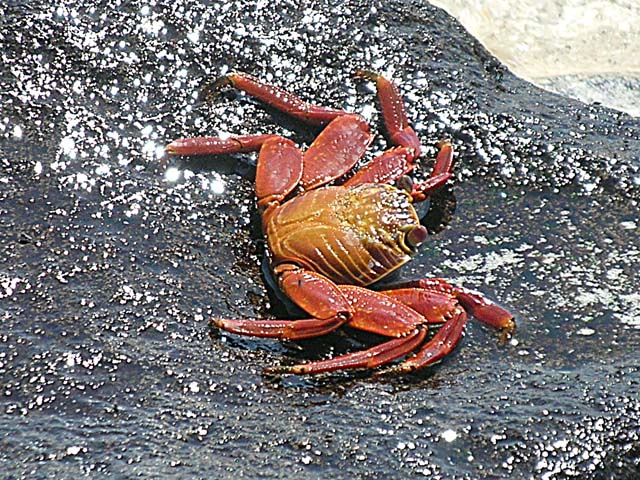 Sally Lightfoot Crab - often seen in large numbers. Scarlet and orange colored but the underside is white,
often bluish. Juveniles are much darker, starting almost black. Juveniles feed largely on algae and animal
detritus; adults feed on other crabs, including their own species, and small crustaceans.
Link to Page Two of Galapagos