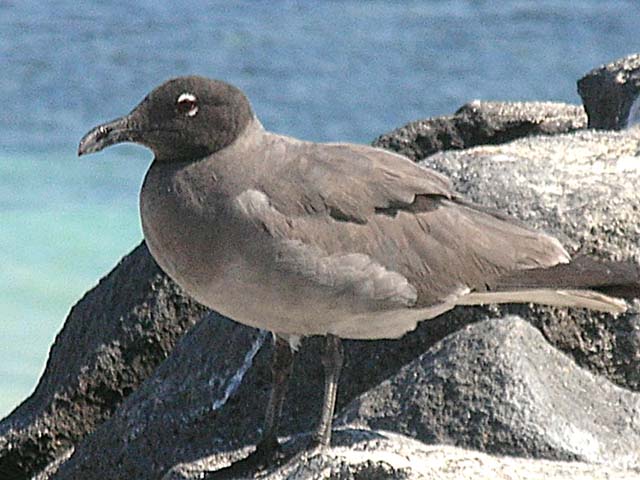 Lava Gull. They have red eyelids, & the head and wings are almost black with the rest of the body dark gray.
The immature bird is largely brown. It is primarily a scavenger and nest robber. It will also eat lizards and
newly hatched iguanas and turtles and will on occasion catch fish and small crustaceans in
shallow lagoons and beaches. 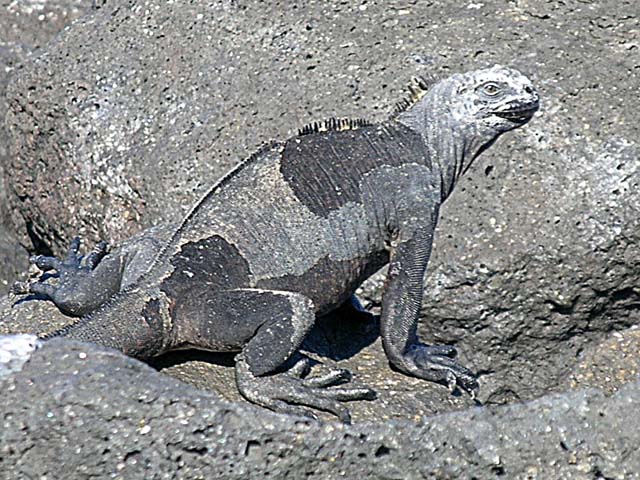 Marine iguana - they blend very well into the lava rocks. The Galapagos marine iguana is the world's
only sea-going lizard. Subspecies vary considerably in size and color from island to island. Marine iguanas
have a pronounced crest that is most prominent on the head but runs all the way down their back and tail.
Because it is cold-blooded but feeds in the cool waters of the Humboldt and Cromwell
currents, it must warm up by basking in the sun on the black lava rocks. To avoid
overheating, it varies its position in relation to the sun. It feeds almost entirely on
algae but is also known to consume its own feces and those of sea lions and crabs. To
eliminate excess salt consumed by their diet, they spit out brine through their nostrils, the
only sound they make. 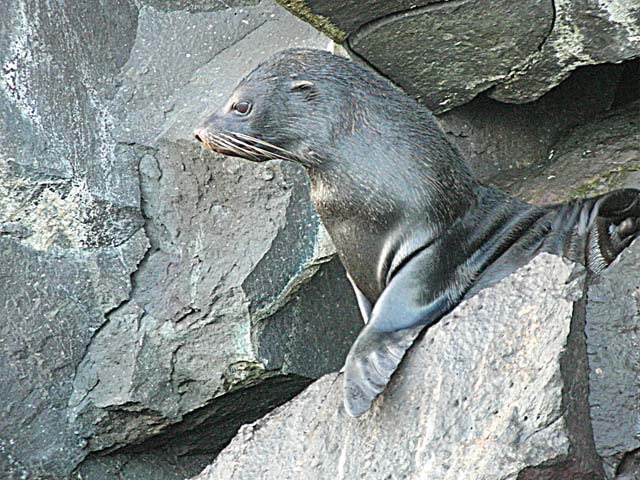 Galapagos Fur Seal - the endemic fur seals are less commonly seen than sea lions. Fur seals are smaller, their
ears are more prominent, and they have larger front flippers. The fur seal's coat is dense, with 2 layers of hair.
They like to hide out in cool caves during the day. 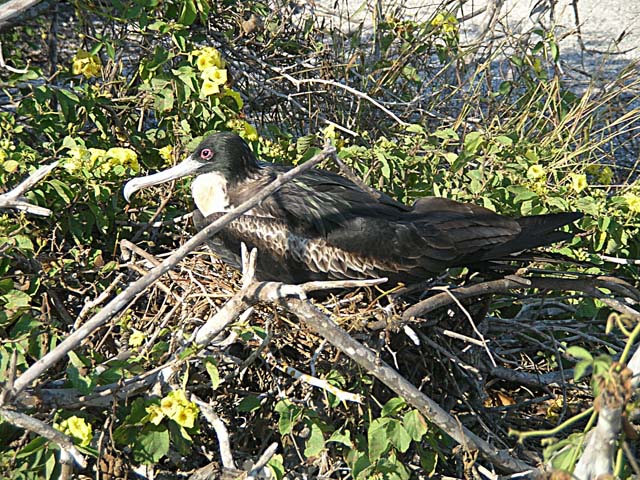 Female great frigatebird on a nest 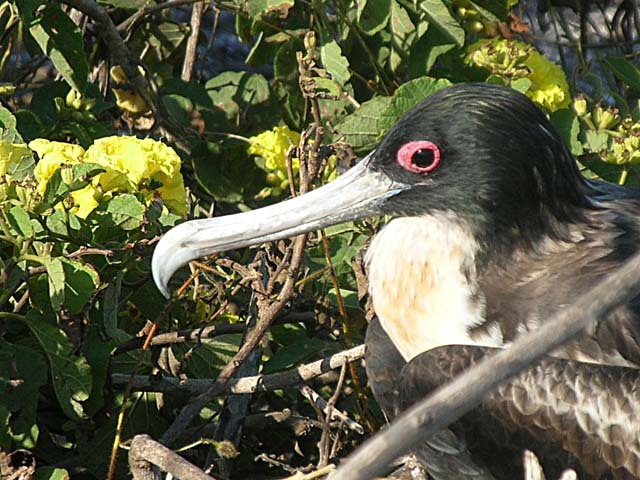 Closeup of the frigatebird 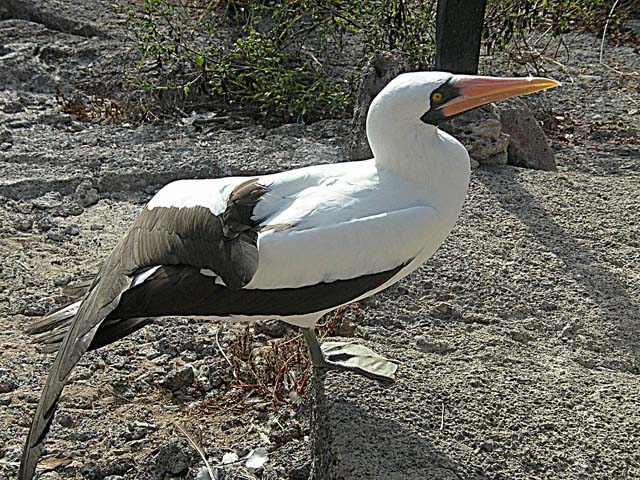 Nazca Booby - largest of the 3 species of booby found in the islands. Adult is almost entirely
white with a black tail and black ends to the primary feathers. Feet are greenish. Feeds almost
entirely on fish. Like other boobies, they catch fish by dive bombing into the water. They have a
reddish-pink or orange bill. The Nazca booby always lays two eggs while nesting, but even in a
good year with lots of food, the older sibling ejects the younger from the nest and only one survives. 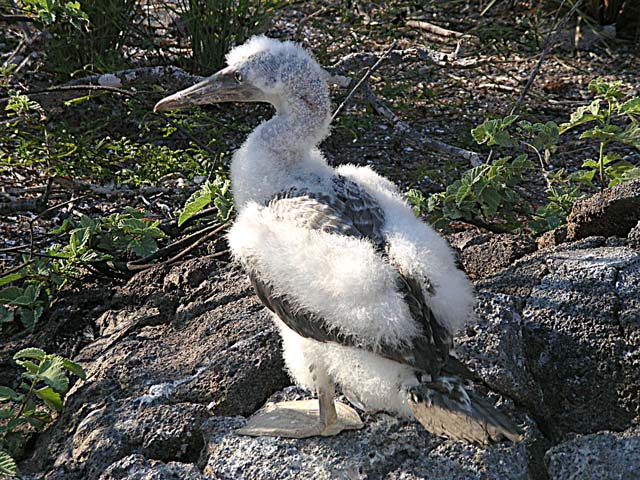 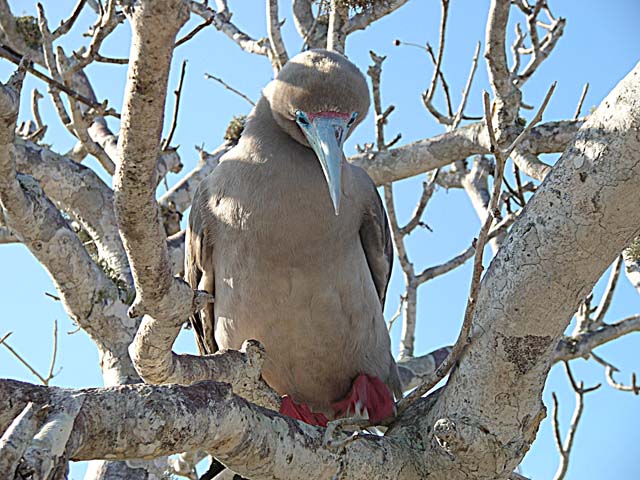 Red-footed booby - smallest of the Galapagos boobies.
Has red feet and a blue bill with red base. Most adults are brown; about 5% are white. Most numerous of the
Galapagos boobies. It feeds far out to sea, further than the Nazca. It builds rudimentary nests in trees, as
opposed to the manure-ringed scrapes on the ground of other boobies, and lays only one egg. This usually
happens when food is plentiful and can occur at any time of year. 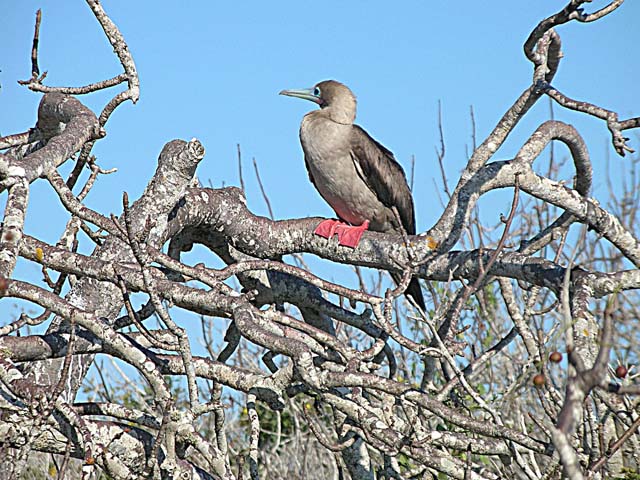 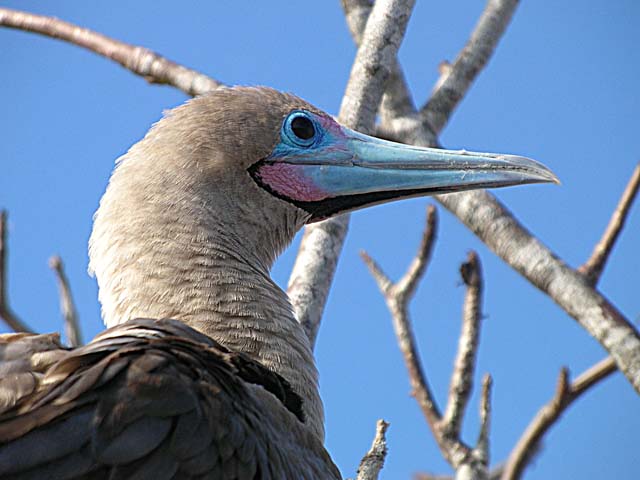